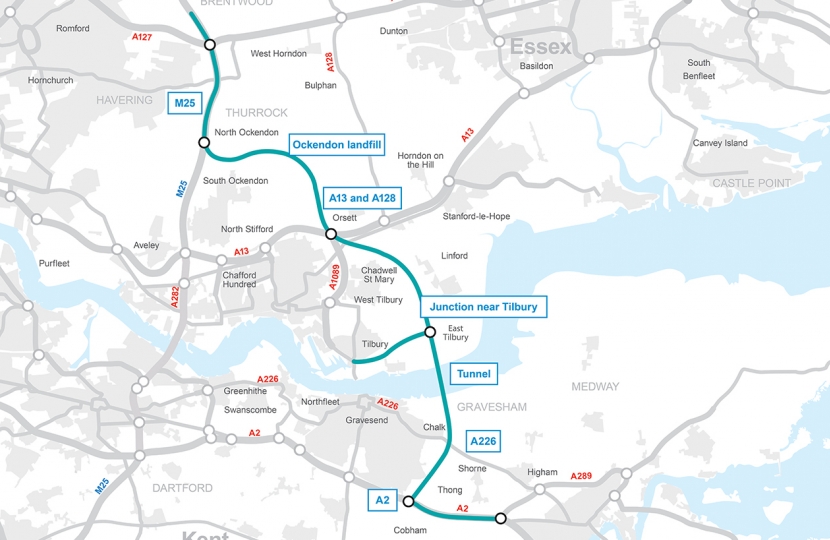 On Wednesday 29th January Highways England released a further consultation on the planned new Lower Thames Crossing following significant changes to the route.  The consultation will run for eight weeks until 25th March.

The key changes to the route are:  Removal of the Rest and Service Area at East Tilbury; a reduction in the height and length of the viaduct; removal of the Tilbury junction and; increased connectivity for residents with changes at the Orsett Cock junction.  The proposed crossing is still set to cost between £5.3bn and £6.8bn.

Jackie Doyle-Price said: “Highways England have made these changes in response to representations.  Whilst I welcome the effort that they are making to take the road away from residential communities, I continue to make the point that residents in Thurrock have showed more support for route 4; and that as it is us that will be most impacted by the crossing our views should carry more weight than the overall conclusion of a national consultation.

When I last discussed this with Ministers, they agreed that Route 4 would be as effective as the current route but that it could potentially impact Coalhouse Fort.  Either way I have been a lone voice calling for this change and as a result there is no appetite for revisiting the route.

Some who argue for the A14 option which is a tunnel that starts south of J2 and exits to the north of J29.   This would bring no benefit to the people of Thurrock and would be a worse option than Highways England’s preferred route.  Our congestion is caused by vehicles leaving and joining the Dartford crossing.  As half the vehicles leave and join at J2 and J30, A14 would make the M25 go a lot faster but would have no benefits for Thurrock whatever.

It is disappointing that Thurrock Council’s Lower Thames Task Force has made no difference to these proposals.  It is now in everyone’s interest for Highways England and Thurrock Council to embark on more constructive dialogue if we in Thurrock are going to get the best out of this bad job.  Dialogue is also crucial to enable the local plan.  I will continue to lobby for the restoration of the Tilbury junction to enable HGV traffic to bypass local roads.  We do need a new crossing and we need to get it done.”

Jackie Doyle-Price raised the issue in Parliament last Thursday challenging the removal of the Tilbury junction which she said would divert HGVs from the Thurrock local road network saying “if we are going to get a road that the community does not want, it is incumbent on Highways England to ensure that it works for us?"

Ministers have promised to meet with the MP to discuss these concerns.

Jackie said: “If we are going to make this road work for us, Highways England must take proper account of how it interacts with the local road network.  It is no use seeing it just as a strategic road.  At the same time Thurrock Council needs to engage to minimise the downside and maximise the upside of this Major project.”